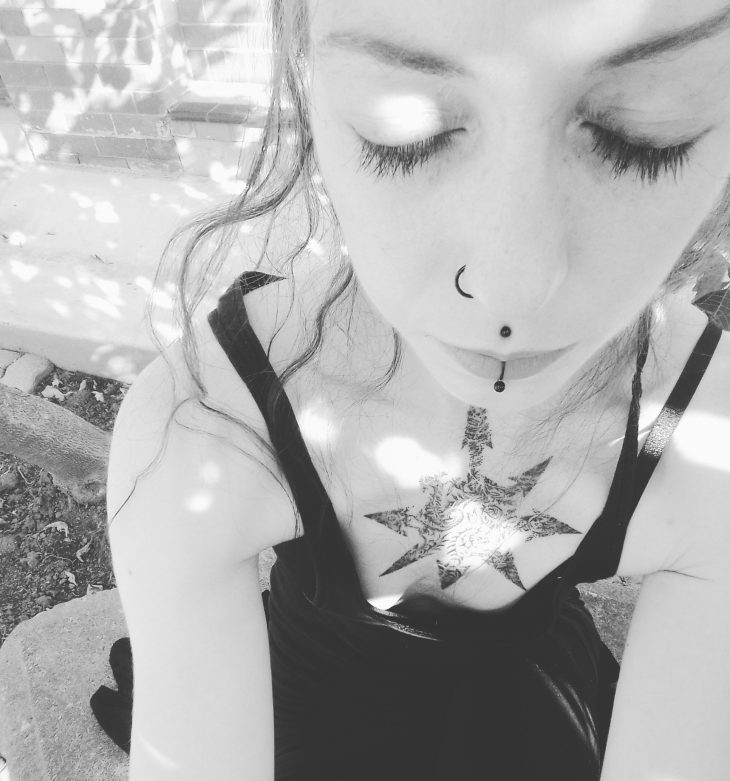 Trigger warning: Before reading this post, please be aware that it includes references to childhood rape.

My name is Zoe van Zyl.
Life has been a struggle, and in the last year I have started coming to terms with it.
Now I have begun to share my story, because I have come to realize that sharing our experiences is invaluable. Knowing that we are not alone is a very powerful thing.

I was born in Pretoria, South Africa in the year 1993. I was born into what might seem a normal family. I have an older brother and my father was a preacher, we were poor, but we always had something to eat.

What no one knew was that under the surface our family life was a living nightmare.

My first childhood memory was of being sexually abused by my father. This is what I grew up with. I never had a childhood, I never felt safe. This was not the only place where these atrocities were committed. My grandfather also sexually abused me. The first time I was raped was at the age of four, after which, at the age of four, I tried to kill myself. I remember walking through the garden eating from every plant in the hope that something would kill me.

My father raped me for the first time when I was six years old.

Life dealt me a terrible hand and I did not escape the terrible strings of abuse until I was eighteen, when I meet my husband.

When I was sixteen years old a young man of eighteen also raped me, after which he committed suicide. The guilt and shame drove me to my second suicide attempt. I tried drowning my self in our pool. I remember inhaling the water and the next thing I remember was waking up next to the pool.

I then got into a very abusive relationship, my boyfriend at the time was physically and sexually very violent. Threatening my life if I didn’t do as I was told. Then I was raped again by one of his friends under my boyfriend’s watchful eye. This happened in the bathroom of a public pool. My life was a mess, after the end of this relationship I went into a time of extreme promiscuity. Damaging my body even more. I simply did not care anymore.

Then I met my husband and it was one of the biggest changes in my life. He was the opposite of every other man I had ever had in my life. Soft, caring and so, so gentle, he refused to have sex with me till we got married, I was 19 years old.

When I turned 21 my mother fell ill with ovarian cancer. The year that followed was one of the toughest years of my life. Dealing with her illness and inevitable death. She passed away on the 8th of January 2015.

My father proceeded to get married two months after. He had no regard for me and my brother, calling us weak for mourning her death.

At the age of 24, he disowned me calling a broken little girl that was nothing of him.

He then fell ill and passed away three months later. That day was terrible, but it was the day I gained freedom from my oppressor.

This was also the start of the toughest year of my life. Three months after his death I attempted suicide for the third time. I just couldn’t cope with the reality of my life so I slit my wrists. I was then admitted to a psychiatric clinic. Six moths later I attmepted suicide for the forth time. At that point I wasn’t eating and I was stuck in serious self harm. I walked around with a kitchen knife in my backpack for a week. I was then admitted to the same clinic for the second time. After my discharge the process was in motion to have me admitted to a psychiatric hospital. In the three weeks that followed I attempted suicide again and the self harm got so bad that I ended up in hospital for emergency reconstructive surgery. I was then admitted to Tara H Morross psychiatric Hospital. Here I was able to disclose my life story for the first time. I spent two months there and I was discharged a month ago. I was diagnosed with Borderline personality disorder, complex-post traumatic stress disorder and persistent depressive disorder.

After my discharge my recovery started. It has been incredibly difficult. I see my start in recovery as a wall I chose to build one I cannot climb back over. I am learning to live all over again. I am starting to understand that I am not my shadows or the things that have happened to me. One day at a time I am getting to know myself. I have realized that the power of trying, regardless of sucess or failure, is a power no one can take from me. So today I wake up and I try. Today I wake up and fight for my life, becuase I am worth it. That is what I wish to leave you with after reading my story. That no matter what the past was, you are not your past. You are worthy to fight for. You are worth trying for. Perhaps one day will come and you will be able to stand seperate from the horrors of your past. So keep trying, keep fighting, don’t stop you are allowed to give yourself that gift.

I live in pretoria South Africa. I love cats, yoga and good coffee. I have been married for 6 years. One of my passions is good cooking aswell as writing and being an artist. I am passionate about inspiring others to overcome thier battles, as i am fighting to overcome my own.