The Voice of a Survivor 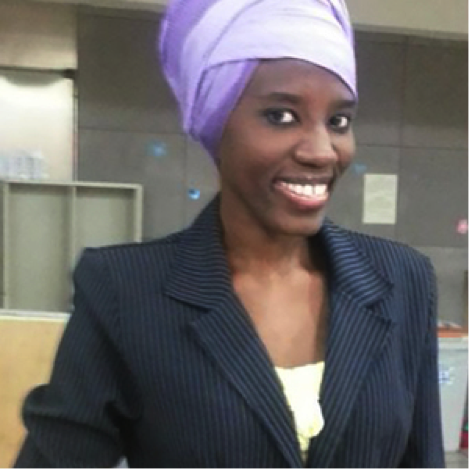 During the three decades I have lived as a woman, I have experienced, felt, and witnessed many discriminatory practices, especially harmful traditional practices such as female genital mutilation and child/forced marriage against women and girls in my community. In most instances, the victims of such discriminations have little or no power to end the injustices they face. This situation is the sad reality for many, just because they are a girl or woman in such environments.

I am a thirty year old woman who decided to question such inequalities, and am still demanding change in my community against these cultural practices and patriarchal norms that undermine the rights, freedoms and integrity of women and girls.

This journey, I must confess, started at a time when I didn’t fully understand what these harmful practices were in the first place. I couldn’t even categorise them as harmful but felt that something is just wrong with denying girls and young women from enjoying the right to their bodily integrity. It is patriarchal norms that allow for women to be sexually controlled and pinned to the needs of men and boys. I also couldn’t understand how girls can be pulled out of school to be married off to relatives, neighbours and even strangers. At that young age, I was convinced that any man who forces a girl to marry him is not a good man, regardless of who he is.

Religious reasons, health benefits, social cohesion, virtuousness and cleansing of women and girls are some of the reasons put forward by the proponents of female genital mutilation. For child marriage, it is usually justified with the prevention of teenage pregnancy or “dishonour” caused by it, and poverty, among others. All these justifications are backed by gender inequality and the exploitation of girls. In a society where social security mostly rests on the extended family system, women and girls become economic tools for the social stability of their families. This is not only wrong but terrifying for any girl to live through.

From a very conservative ethnic group, I was socialised to believe that FGM, like other traditional practices are in the best interest of women and girls. The consequences of the practice became very obvious to me when I started teaching myself about the inequalities girls of my tribe face in their daily lives. Illiteracy and unemployment put us all vulnerable to economic deprivation, dependency and a vicious cycle of poverty. I wanted to break this ritual to become an educated girl who will make things happen for my mother and other women in a community that continuously deprive them from achieving greatness or even when they do so, their recognition often is attached to the men in their lives.

Being the first girl to attain university education in my paternal extended family, I thought I deserved great respect and admiration. I wanted to serve as a role model to girls to attain education and build livelihood skills to live productive and independent lives. My expectation to be an exemplary young woman turned into a nightmare when I narrowly escaped a forced marriage. At the age of twenty-five, I couldn’t imagine that a marriage was being arranged on my behalf without my consent. I declined the proposal based on the reason that I will decide how I live my life by choosing my own partner without any form of coercion.

Through this experience, in addition to the scars I carried from FGM, I felt even more compelled to do so something for the many girls in my community who can’t protect themselves from such violence. Despite all the odds, I believe in myself. I knew I can be the voice to demand for equality, freedom and social justice for the oppressed and marginalized. I set myself on a personal journey to change this situation.

Turning the prevalence rates of FGM from 77% to 0% and child marriage from 36% to 0% has become a life commitment. The reality is this is such a giant goal and a vision that is overwhelmingly complex, yet with commitment, I am convinced that it is attainable. I don’t have all the answers, neither do I understand all the complexities that hitch my ambition to end FGM but my devotion is deep. Although gender-friendly laws and policies are required in order to fully address gender-based violence, I am conscious that a social change movement must be the bedrock for any meaningful change to attain for women and girls. With few friends, I had an idea to create an initiative that will contribute to this movement.

In 2011, I co-founded The Girls’ Agenda, an organization led by young women in my community to address several issues that undermine the progress of young women and adolescent girls. Through this organization, I educate, campaign, lobby and demand for the respect and protection of the sexual and reproductive health rights of girls and young women by addressing child marriage and FGM among others.

My best strengths lie in my social mobilization skills and ability to initiate community friendly initiatives to educate my people about the human rights violations and consequences of child marriage and FGM and how we can work together to uphold the rights of every young woman and girl. Through this work, I am transforming lives.

Working with local politicians, religious leaders and institutions, custodians of tradition, parents and guardians, I have been able to initiate discussions regarding sex, sexuality; openly talked about the clitoris, vagina and penis and other reproductive health right matters with very conservative and sometimes difficult populations. Surely, these sessions were sometimes hard to manage but the necessity to penetrate these individuals and or their institutions will enable me to achieve any meaningful progress for my beneficiaries.

In addition, I also lead activities that exclusively target young people. To end FGM, child marriage, honour killing or virginity testing in my generation, it will be through the voices and actions of young people. It definitely will be through the initiatives we lead to create change for girls and women to thrive. Seminars with young researchers and academics, conferences with young people, exclusive summer camps for girls and trainings for young people going to religious institutions, experience sharing/story telling sessions with teenage mothers and survivors of FGM are some of the activities I lead.

These initiatives are empowering because these young people are able to openly talk about sex through comprehensive sexuality education modules and make choices about their bodies. The programs are also reassuring for a brighter future in the women’s rights movement because girls can openly discuss and suggest solutions to their own problems.

These efforts have turned me into a young leader conscious of my rights and those of my peers as we tirelessly work to ensure these rights are respected and protected. This has enabled me to become a change agent by mobilizing young people to lead this process. We are gaining grounds by breaking the most difficult barriers, glass ceilings and stereotypes that draw us back. It is possible for every young woman or girl to be a leader of transformation, a voice for the voiceless and a beacon for a free society where women and girls’ human rights will be protected and guaranteed.

Oumie has more than ten years of experience in the non-profit and voluntary sector working for and with underserved groups and communities. She is the co-founder of The Girls’ Agenda, a community youth organization. Through this organization, she campaigns for the rights of girls and young women in her country by demanding for investment in their education and reproductive health. Currently, she focuses mostly on harmful cultural practices such as female genital mutilation, arranged and forced marriages. This role allows her to conduct capacity building programs on comprehensive sexuality education, life skills, and leadership development for adolescent girls. She also worked with the Network against Gender-Based Violence- The Gambia for almost a year, advocating for the elimination of violence against women and all forms of discrimination by targeting policy-makers and religious leaders. In that position, she worked closely with young people to galvanize voices against gender-based violence. Oumie spent nine years with the Nova Scotia Gambia Association, a non-profit group that works on health promotion in schools and communities. During those years, she focused on adolescent development through peer education, mentorship and leadership skills transfer to keep vulnerable girls in school. Because of her commitment to the advancement of the status of women and girls in her country, Women Deliver awarded her the “Global 100 Young Leaders Award” in 2012. Also, during her graduate program, she did a fellowship with the Carnegie Council for Ethics in Global Affairs where most of her researches were on women’s human rights in global politics. Presently, she leads successful campaigns such as exclusive summer camps for teenage girls where they learn about crucial reproductive health matters and build their assertiveness skills to protect themselves from discrimination. Further, Oumie and her team engages excluded young people in religious institutions to train them on gender-based violence and encourage them to join the ongoing advocacy for women's empowerment. Through these activities, she gained an extensive experience in initiating and managing health and reproductive rights projects in remote, poorer and under-served locations. She has keen interest working for and with groups that empower girls through education and the elimination of all forms of degrading and harmful traditional practices. Her latest leadership role is a board position with Fashion Redefining Justice, a New York-based organization working to empower adolescent orphans and vulnerable children in Sub-Saharan Africa.