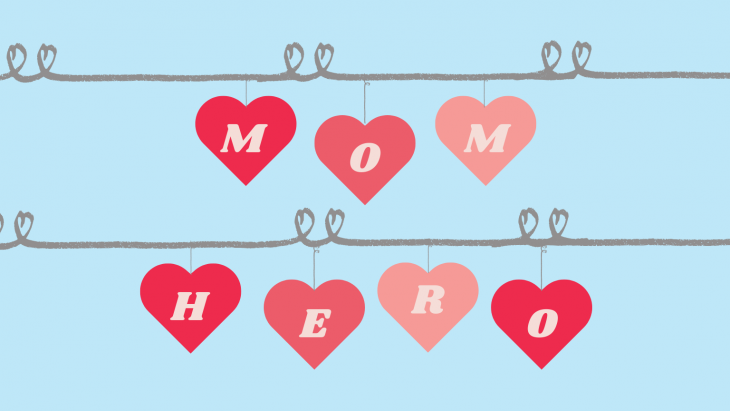 These are the words that come to my mind when I think about my mom. Raising two little girls in a single-parent household was not always easy for her, but she never let anything get in the way of being the best mom, the best example, and the best hero that she could be.

It is very important to dismiss and clear the stigmas single-mothers face within society and actually take the time to perceive and listen to their struggles. Being more open minded will give us a better understanding of their lives and what they go through, rather than judging prior to knowing their stories. Many people stigmatize these individuals as women who simply want to take advantage of the very limited resources they are being provided; however, those critics fail to realize the immense strength and power our single moms hold. After all, they are taking on the role of two people, which is not always easy.

Growing up in a single-parent household myself, I saw my mom struggle in different ways, however, that did not mean she was any less of a mom or didn’t provide for my sister and I in the ways she was supposed to. Because my mom worked so much and my sister and I were involved in many sports growing up, she would hardly have time for herself because she was always driving us back and forth to our different activities. I remember specifically when we were around 9-years old, my sister and I were involved in swim and soccer. My mom would wake up early to make breakfast and lunch, take us to school, go to work, and as soon as she got off work she would rush to pick us up from school. We would have back-to-back practices, rushing to soccer practice after swim.

I remember how tired she used to be at the end of the day. She would wake up around 5:30 a.m. and wouldn’t be home until around 8:00 or 9:00 pm. She never once complained. My mom gave, and continues to give, my sister and I all that she can, even if it means having fewer things for herself. She would rather buy us everything we needed for our extra curricular activities, new clothes for school, take us on movie dates on the weekend, etc. than spend a dime on herself. For this reason, and many others, my mom is my hero.

Although making up 23 percent of all households in the nation, single-mother households receive no broader societal support and must work 10 times harder for the things that they want and need. They must fight hard for the survival of their family with a single source of income to provide for the entire family’s needs. This can be more challenging for many women due to the gender wage gap. Regardless of whether you are rich, poor, or middle class, problems and obstacles can and will arise and these moms are expected to find ways to singlehandedly overcome them. Struggles may include working long hours, feeling isolated and alone, making crucial decisions on your own, being constantly tired, and experiencing stress and anxiety. These women must face the struggle of people judging them, believing many of the single-mother stereotypes.

My mom has been the best example of what a mom truly is: someone who loves you unconditionally, protects you, helps you, and wants the best for you. According to statistics, 70 percent of Americans believe that single moms have a negative influence on society. However, my mom is far from being a “negative influence” on anyone. She came to the United States at the age of 16, knowing very little English. After getting situated in a new country, she began working and has been working ever since. Having worked as a playground aide for more than 10 years at an elementary school, she has touched many hearts and has inspired others to always work hard while remaining humble.

When I was younger, I used to volunteer at my mom’s school while I was on holiday or school breaks. Speaking to the young children, as well as some teachers, I learned that my mom, as I expected, was very well-respected and everyone spoke very highly of her. This reassured me that not only was my mom positively impacting my life, but also the lives of all the young children around her. Some of them even called her “Mom.” Not only was she my hero, she was theirs too.

My mom never threw away the clothes that my sister and I would grow out of because she wanted to give them to the kids at school who were struggling financially. She is the most selfless person I know and she inspires me every day. She always thinks of others before herself and makes sure to give back when she can. She is a great example of never forgetting where you come from. Although she may not be the wealthiest, she gives the most she can to try and prevent others from struggling. If she could, she would make sure that nobody lacks anything in their life. The many positive characteristics that my mom possesses inspire me to be a better individual and motivate me when I am going through difficult times. She is the type of mother I hope to be one day.

My mom has always taught me to be thankful for the things that we do have, and not focus on the things that we don’t. She teaches me to be humble and reminds me that everyone struggles, therefore, no one should be belittled for the problems that they face. She shows me that throughout life, you must encounter every situation with a positive attitude and always remain optimistic.

Contradictory to the stereotypes made about single-moms being “desperate for a man” to pay all the bills, heal their broken hearts, and to be a father to their children, my mom never needed a man to get her through life. She raised her twin daughters all on her own. Because of her, my sister and I have recently graduated from 4-year universities with bachelor’s degrees. We are who we are because of our mom. We are strong and independent because of her. We defeated and broke down barriers that were put in front of us because of her. My sister and I are educated, first-generation, Latinas who are the products of a single-mom household. We are living proof that single-moms are strong, hardworking, independent women fully capable of raising children, even twins, to become successful and reach their full potential. These women are just as powerful as two parents together.

I have never thought of my mom as being anything less than the perfect parent. She does the job of two people and she’s never given less than her very best. In a traditional family, it takes two parents to raise a child; in my family’s case, a single-mother raised twins. She says parenting is her number one job, and our success is her paycheck. Quite frankly, I have never felt like I’ve been missing anything in life. Having an absent father has never phased me and I think the biggest reason for that is because of how successfully my mom has carried her role as a parent. I am proud to say that I come from a single-mother household because it proves women are powerful beings with the ability to fully fulfill a father’s parenting role while simultaneously fulfilling her own role as a mother.

This post originally appeared on the Platform website and has been reposted here with the permission of Gabriela Aguilar, the storyteller, and Jennifer Mandelblatt, Platform Co-Founder & Executive Director. You can follow Platform on all social media at @platformwomen.

Gabriela Aguilar (she/her/hers) graduated this spring from the University of California, Riverside with a B.A. in Sociology. She plans on attending law school in Southern California next Fall. During her time in D.C., she has enjoyed interning for a private immigration law firm, as well as interning for Platform. She is passionate about a variety of issues regarding social justice, specifically racial inequality in prosecution, discrimination within communities of color, and the violation of human rights.