The Courage to Leave An Abusive Relationship 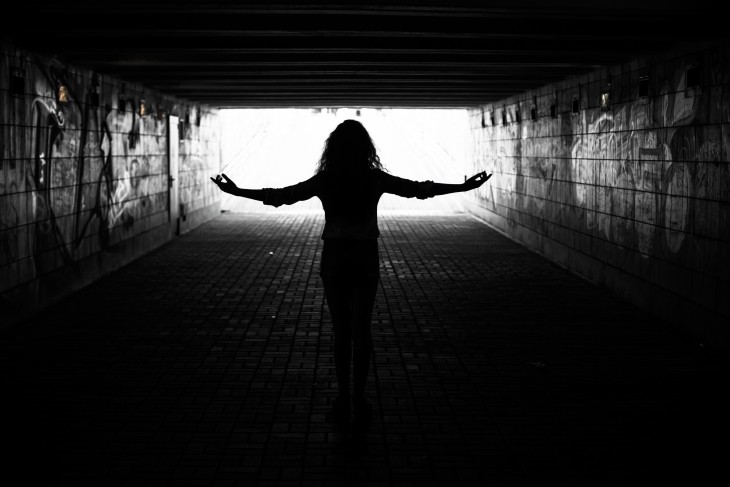 “A woman in an abusive relationship tries six or seven times to leave before she is successful.” This is the statistic the DSHS caseworker gave me as I sat in front of her, hiding behind a file of court documents and police reports. I held it defensively, as if to say, “I am not a bad mother. I have tried–see? SEE?? Here’s the proof!”

But she did not want to see my proof. She compassionately smiled at me and told me that abuse is not quantifiable or document-able. Abuse is often quiet and cyclical. It often happens unconsciously, so the bouts of rage and manipulation seem natural. And she could never ask someone to “prove” something they experience so deeply.

My eyes wander as she lists more statistics. They land on a small star, a stamped watermark on a piece of paper behind her. The insignia for the Sheriff’s Office. Seeing that star triggers more tears, as I remember the night before when a police officer handed my daughter a stack of stickers with that same six pointed symbol of protection. He had been so kind when speaking to her, promising her that if the bad guy came back, he would be there to keep her safe. He told her that she needed to listen to me because it is my job to keep her safe too. I held onto her, while he spoke, tightly, hoping and praying that he knew just how sorry I was. I’d like to think that he knew. I’d like to think that he gave my daughter those stickers, knowing they would be not just a symbol of protection, but a symbol of strength and hope. After the officers left, she peeled off the backs of the stickers and we placed them in various places throughout our little home.

The DHS caseworker told me that seeing a counselor in the next few months would be crucial because I would be re-processing things. And that retrospect is very powerful when someone experiences trauma and I would need help sifting through the emotions. I told her that my daughter and I were already seeing a counselor. I could show her the proof! I had a letter! But she waved off my letter with the same dismissiveness that she waved off my restraining order.

The restraining order, I tell her, was the hardest form I have ever filled out. She nodded knowingly. I share with her, how while I listed the reasons why I needed that piece of protection, I discovered so much about our relationship. The little manipulations, the little abuses, the little hurts – they all added up. I realized that they are, in many ways, insidious. I thought I was crazy for so long. When someone tells you that your thoughts and feelings have no value over and over, you begin to truly believe it.

She asked about my support system. I told her how I had begun to catalog friends and acquaintances, cutting myself away from anyone who associated themselves with my kids’ father. Many of the people I cut out of our lives were people I loved, but I couldn’t risk the danger of them leaking even a bit of information about us. And it broke my heart. What broke my heart the most was that so many of those people I loved knew about the abuse and did nothing. Or they dismissed my final calls for help as attention seeking – as the actions of a crazy person. That is what broke my heart the most.

But something amazing also happened when I first opened myself to help. People stood strong in support. People I had damaged relationships with, people who I barely spoke to, and friends who cried to me that they were so, so happy that I finally opened my eyes. It was these people who helped me fortify a wall of protection around my family. It was these people who gave me the strength and support I needed to make very difficult decisions.

At the end of meeting, the caseworker shook my hand. I didn’t want a hand shake, it seemed so impersonal for the pieces of myself that I laid before her. I asked her for a hug and wrapped my arms deeply around her. She didn’t seem surprised that I would hug her so tightly, as if I were absorbing her compassion and kindness. She pushed out of the hug and handed me a stack of papers, warm from the printer. A stack of papers saying that DHS wouldn’t need to investigate and would be offering financial assistance as we moved into a safe haven near my work. It was a stack of papers that would go with another stack of papers, that I would hold closely for many months, using as my own affirmation that I am a good mother.