Tell Her She Can Run 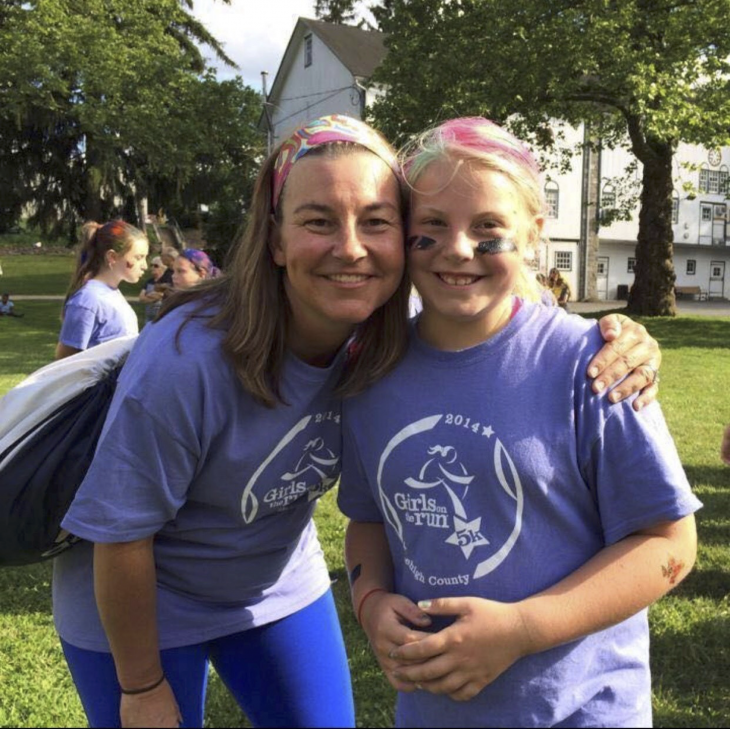 Dedication: GOTR LV Staff (Jess, Liz and Lisa) for all of their support of me and my coaching journey.

At the age of 9, my daughter was beautiful and bubbly, intelligent and funny. Always tall for her age, she possessed a body built for strength and she was using that strength to become a decent swimmer. Nine was a year of great growth and it was a year of doubt. This would be the year that she became more sensitive to how she looked and the size of her clothes. In spite of every bit of praise I could muster about who she was and the amazing things her body could do, she only understood that her body was different. And like many of us, she didn’t like being different. She longed to blend in.

It was that same year that we were introduced to a program called Girls on the Run. She had a great teacher who was a runner and got the girls in her class excited about GOTR. While I wasn’t sure that my daughter was cut out to run 3.1 miles, I was willing to give this program a shot. So one January evening at 6 pm, the sign ups opened and I was on line. The slots fill up fast, I was told, and you wanted to make sure to sign up right away. The amount of the registration was something we could budget, but through this process I had a moment of…what do other girls do? What do other girls do who don’t have a parent who is able to be on line at 6 p.m. to pay a nice fee for a program that they hope will work for their daughter?

When I look back, I am not sure when I first started to be aware of my body image as a young girl. In a world where my greatest exposure was the JCPenney catalog and an occasional Seventeen magazine, I know it was much later in life than my daughter. When I look back, I am sure when I first realized that I, too, could run. It was at the age of 43 when I signed my daughter up for GOTR. The program has the option of signing up a friend or family member to run with your daughter or assigning her a running buddy. When she asked me to run with her, I said: “I’m not really a runner.” She said: “neither am I.” Touché, I signed up to run with her.

From March to June, we became runners. She would come home after each practice and tell me how many laps she was able to do. The number of laps grew, but more importantly she grew. She would also come home and tell me about the lesson of the day. Girls On The Run incorporates lessons on self-esteem and self-confidence, while it encourages healthy eating choices and taking good care of your body. Soon, inspirational quotes started to appear on her door…they were cut outs from the lessons they did at GOTR. About the same time, she started to explore healthier snacks and become more aware of the choices she was making. This program was making a positive impact!

And then it was race day. As we made our way down the hill to the race, music was pumping and flashes of pink caught my eye against the beautiful blue sky and the green grass. There were stands to get your hair sprayed and healthy snacks to consume. And there were happy teams of girls getting pictures taken together as they prepared to run.

The gun went off and hundreds of girls and their running buddies took off together. There were fans cheering and water breaks at key stations along the course. And the course, itself, was filled with running buddies encouraging their partners. You can do this, they were telling the girls. And they did. Every. Last. Girl. Finished. How is that for incredibly amazing? These girls, many running their first 5K, all crossed the finish line. Sure, they did so at different paces, but the cheers were as strong for the first one who crossed as they are for the last one. As I watched one young woman use every last drop of energy to cross the line, supported by multiple running buddies, I became hooked. A program that could make this much of an impact on one girl multiplied by hundreds was one that I wanted to support in any way that I possibly could.

As for my daughter, she turns 11 this week. I wish I could tell you that every doubt that she had about her body disappeared after GOTR. It didn’t, but neither did the impact of GOTR on her life. She still prefers the swimming pool to the running course, but the important thing is she knows SHE CAN RUN. Those lessons on self-esteem and self- confidence still seem to be with her. I can see her growing more confident every day, and I can see her learning to appreciate her body for the amazing abilities it has. I am incredibly thankful that we came across this program. I am even more thankful that we were able to afford her participation, because, unlike me, she is exposed to so much more than the JCPenney catalog and an occasional Seventeen Magazine. She and her peers are flooded with images hourly of what their bodies should look like and do. I want to support a program that helps to send the right messages and helps to build self-esteem. I have witnessed the impact Girls on the Run on “my girl” and I am committed to providing the same opportunity for other girls in the Lehigh Valley.