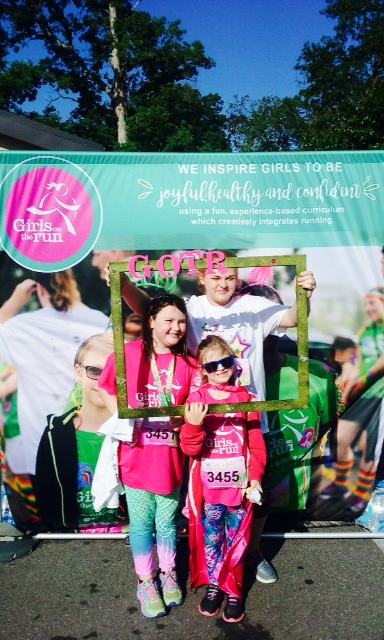 My name is Bunny, like a rabbit, but I am more commonly known as “Ally’s Mom.” Being Ally’s Mom is both an honor and a challenge, as she is exceptionally bright…and equally headstrong.

At the end of school last year Ally announced that she wanted to join Girls on the Run in the fall since she would “FINALLY” be old enough to participate. Her cousin Jade had been telling her about the program for two seasons, and Ally was eager to join in the experience. She was so excited; she made me set a reminder on my phone for 6:00 PM the moment registration opened for the 2016 Fall Season. The night the reminder sounded we sat together with her younger brother at the top of the stairs to fill out her registration on my phone and she jumped up to do a happy dance once we were done. I was brimming with pride that she had taken initiative and followed through. I had heard so many great things about Girls on the Run, and I was curious to see how Ally would respond to this program and the challenge of running a 5K.

When Ally was 4 years old I made a decision that would have a huge impact on our lives: I decided to strike out as a single mother and leave behind the abusive relationship that dominated our existence up to that pivotal moment. Having witnessed most of the abusive behaviors of her father, Ally had difficulty self-regulating and was prone to emotional outbursts and uncontrollable fits of anger. For almost a year after we left she experienced night-terrors, and I would spend hours trying to console her.

Once the season started I noticed a dramatic change in her attitude. She began parroting phrases from practice. If she felt angry she would stop herself and breathe in and out slowly, several times, until she regained her composure. She started saying nice things about herself and her younger brother, AJ, to increase their “positive self-talk.” Ally would be gushing excitedly on practice days about the Lesson and she developed a healthy glow…not to mention a healthy appetite! When the “No Fizz Challenge” started Ally took it VERY seriously and encouraged the rest of our family to participate in order to show our support. During this time she exercised self-control and learned the importance of accountability. Girls on the Run got us ALL up and moving as she trained and we were determined to keep up with her!

As the Season progressed she began building others up in deed and action. From the first 5K to the final 5K I witnessed a strengthening in her resolve to improve her performance. She finished 15 minutes faster her second race!!!!! I believe this program gives her an outlet and provides her with the language of self-expression and an environment of acceptance to push herself outside of her comfort zone. It is truly remarkable what Girls on the Run achieves and the far-reaching impact it has on our girls and the community as a result. Words alone fail to express the depth of gratitude I feel for this program and our incredible Coaches! I hope we are able to run many more seasons together and the reminder has already been set for this coming season! See you at the Finish Line!!!!!!!

I am a 37-year-old Mother of two. Ally, my daughter, is 8 and AJ, my son, is 6. We live in Gastonia, NC and do our best to lead full, happy, ACTIVE lives. As a LET ME RUN Head Coach I try to model positive behaviors for my children and instill in them the importance of Acts of Service. Every day is a new adventure!