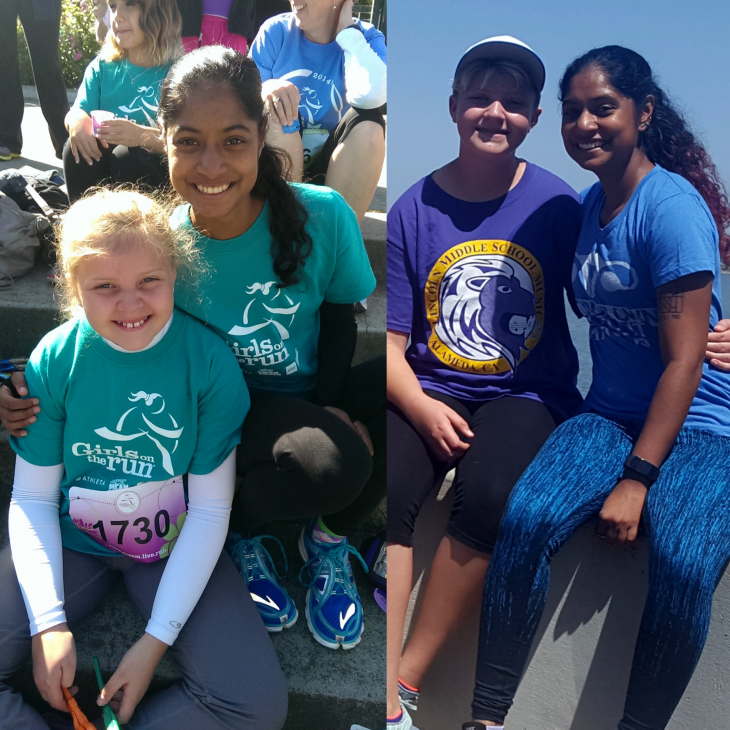 In my third season as a coach with Girls on the Run (GOTR), I met McKenna. She marched to the beat of her own drum, unleashing her unique, creative and occasionally – but unintentionally – inappropriate sense of humor at every turn. She always had the team in stitches with her punch lines and was always the first to plug in her positive cord at practice.

McKenna wasn’t the fastest girl on the team. It doesn’t matter how many times you stress the importance of moving forward over being first place to a nine-year-old; they see that they’re the last – and they feel it. One day, when her spirits seemed a bit low, I challenged her to find her Turbo Button within and hit it for the last few yards of a lap.

This girl could sprint.

Quickly nicknamed ‘Turbo,’ she kept her pace in the back of the pack, turning on that infamous Turbo button as she finished her workout at each practice. Her dad, Gerald, was going to join her as a Running Buddy but expressed his own anxiety about his ability to run a 5K and asked a close family friend to run with McKenna instead. They were last during our team 5K, but they finished together.

The last day of practice before McKenna’s first 5K was unusually cold and rainy. As the girls finished their final workout, McKenna was bringing up the rear. Be it the weather, anxiety about the race or just a bad day, Turbo’s positive cord was punctured. There would be no Turbo today; her negative cord had taken over and she was done. No one could bring her back out of her funk like she had done for everyone else for the previous ten weeks.

Two days later, McKenna showed up in her normal positive mood on an absolutely freezing morning for her first race. She was in a good mood, if not cautiously optimistic. The team split up as the race started. About a mile in, I saw McKenna out on the course – I ran up alongside her and she flashed her huge grin at me. I said, “Turbo! You just ran a full mile without stopping, which you have never done! You’re killing it! How do you feel?!”

“Coach Jess, I feel like I can do anything right now!”

Turbo finished her race. She came back the next spring. A year after that first season, Gerald joined her as her Running Buddy – they finished the team 5K in first place!

Today, Turbo is a couple of years aged out of the program. She is an active GOTR Alumni for her local chapter. She cheers and roots for the new generation of GOTR runners when she has the opportunity, positive cord in full effect.

I’m lucky to run with her a few times a month. She still has that unmatched sense of humor and it’s been an honor to watch her grow up. Now and then, we run community 5Ks with her fellow GOTR alumni. She still occasionally expresses some uneasiness about completing these races. I remind her that yes, it might be hard, but I’ll always have her back. She can overcome the new challenge, just like that first time.