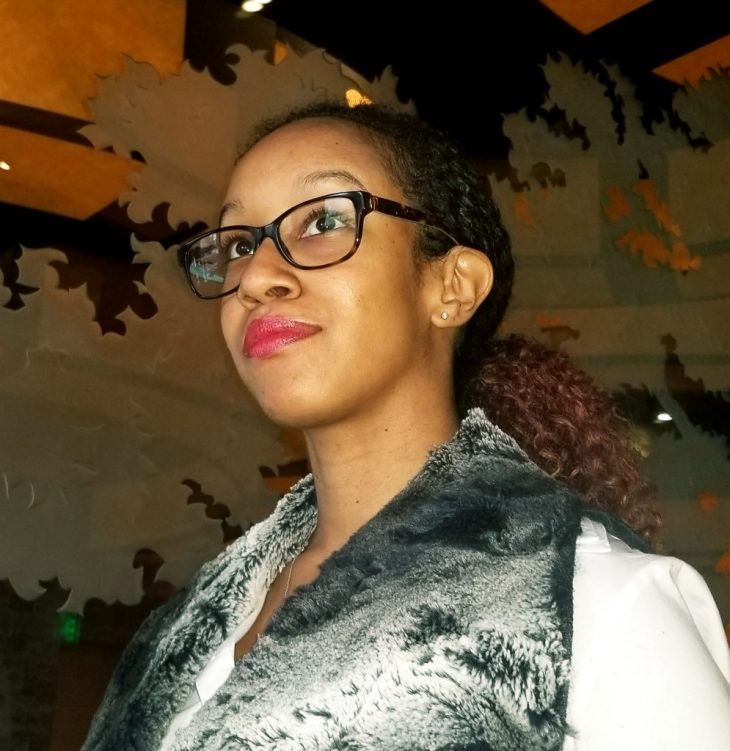 Dedication: To those dv, trauma, and sexual assault survivors who are pushing to find their greatness in life after facing turmoil. It's your time to shine!

There are few words that can be used to describe KayLa Allen: unstoppable and unparalleled in her compassion, resilience, and drive. KayLa successfully balances the challenges of being a full-time doctoral student (Doctor of Health Administration) with her business endeavors via her business and platform Dr. KayLa N. Allen (coaching, consulting, executive leadership development, motivational speaker, blogging, vlogging, letter writing, and healthcare administration). She does all these things, still finding moments with her friends, family, and fiancé, all while maintaining a 4.0 GPA.

Through hard work and determination, KayLa has created a life for herself that reflects all she holds close, but reaching this point wasn’t easy. KayLa is the first to admit this, and as a self-described “survivor-turned-warrior,” she acknowledges how her past has helped shape the person she is now.

KayLa recounts her first experience with domestic violence in absolute clarity. She vividly describes screams echoing through the house and bloody handprints on the walls leading to the room where her grandfather stood beating her grandmother. She says it’s an image she’ll never forget. Growing up in a multi-generational household, KayLa was exposed early on to the actions of an abusive grandfather. Though at first, it was through observation, later he began to take his anger out on her too–throwing away toys and engaging in extensive verbal abuse. KayLa has very little description beyond that, as the pain has blocked most of the memories.

Flash several years forwards, and KayLa found herself in a different type of abusive relationship–that of emotional manipulation.

“I was in love with someone who was in love with someone else,” she admits.
For years KayLa succumbed to this man. He bounced in and out of her life, but each time she welcomed him with open arms. She forgave the moments of distance because when he was there, he was comforting, and this seemed more important than sharing reciprocal feelings. These years were painful, and it took time to extract herself, but soon KayLa moved on to dating other people, men and women (with the core reason being the need to feel loved).
KayLa’s first relationship with a woman was also emotionally traumatizing, though it had little to do with how her partner treated her.

“My mother had gone through my emails and found one from my girlfriend at the time,” KayLa says. “The moment she found it, she told me to get out. She told me that she wasn’t going to have anybody gay living in her household.”
Not only did KayLa’s mother evict her, but she took most of her belongings, her cell phone, shamed her in front of the rest of her family, and forbid them from taking her in.

Shortly after, several leaders from her mother’s church reached out. When KayLa accepted the invitation to meet, she hoped for comfort. Instead, they interrogated her, asking what she did in her relationships, and asked her to think about how the Bible addresses “homosexuality.” When KayLa agreed to allow the church community to send her cards, they only further degraded her. “Their words and the blame hurt me for years,” said KayLa.

They soon sent her a letter saying she was no longer a member of the Church of Christ.

With no money and no place to go, KayLa fell into homelessness and a series of bad relationships. The first of this series KayLa describes as plagued by “red flags.” From day one, it seemed her new girlfriend wasn’t willing to be loyal. KayLa ignored the initial signs, but soon tensions began to escalate. “She would take out her insecurities and stress on me; she started to get more physical and used drugs more and more frequently.”

The drugs were tricky, KayLa admits, because she had no idea what heavy use looked like before entering the relationship. Her abuser’s routine cocaine use went virtually unnoticed. The physicality was more pronounced.
“She would do it in front of whoever, wherever,” KayLa says. “Also, she was cheating on me with multiple people.”
The abuse continued for about two and half years, and KayLa stayed only because she found herself clinging to the “good moments” because “when things were good, everything seemed fine.” Most of the time, though, things were not good.

KayLa describes one night that her girlfriend broke into her house, completely under the influence and belligerent. The confrontation was so loud that neighbors called to ask if she was okay. KayLa felt trapped, responsible for someone who didn’t want to be helped yet struggling to maintain her sanity. If not for the abuser’s mother, who pushed her daughter towards rehabilitation, there appeared to be no other end in sight.

“I lost my voice, my apartment, my job, my car. I lost everything in that relationship because of her recklessness.”
Shaken and trying to heal, KayLa found herself seeking refuge in yet another relationship, this time with a man.
“If someone showed me they cared about me, I ran into their arms. “My life at that time was a lot of looking for love in all of the wrong places,” she acknowledges when speaking of the way this man mistreated and manipulated her. “I would do anything he asked,” she says, and he asked a lot.

Knowing her sexual history, this abuser attempted to force KayLa to sleep with another woman for his pleasure. When she refused, he was persistent. He threatened to kick her out of his house, where she was living at the time, and even tried to force her to take drugs to numb the experience. Again, all for his pleasure.

KayLa left this relationship and decided to make some significant life changes. She started working again, decided to go back to school, and in doing so, moved to a new home in a new state with a new roommate. Things seemed off with the roommate from the beginning. She drank too much and once stole something valuable from KayLa’s college campus while KayLa was in class. KayLa left the building to find her roommate restrained by several students and professors until the police arrived.

Despite this, their relationship soon intensified beyond platonic living partners. This was when the physical abuse began. KayLa describes an incident in which she and her roommate-turned-abuser got into an argument. The abuser disagreed with KayLa, so she grabbed her by the throat and choked her to the floor. After minutes of breathlessness, KayLa managed to escape “by some miracle,” but when she ran to seek help, her landlord told her not to report the assault or call the police because it “would compromise the property value.” When she went to the police directly, they laughed and refused to act. The magistrate declined to address the issue, reasoning: “lesbians always get back together.”

Left without a lifeline or support system, KayLa began to suffer in school. This girlfriend couldn’t hold a job and as money began to run out and her grades continued to decline, KayLa decided she needed a brief reset.
Back home with family, KayLa started to feel like a new person. She broke up with the abuser, who had started regularly cheating, and began dating again. Despite falling briefly back into the emotionally manipulative relationship from her youth, KayLa was moving on. She returned to school determined to finish her Bachelor’s degree (Interdisciplinary Studies with a focus on the sciences and a minor in Psychology).

A final challenge presented itself when KayLa realized her ex-girlfriend was still living in their shared apartment and refused to leave. After several failed negotiation attempts, KayLa decided she had had enough. She packed up her things, moved out, and blocked all forms of communication.

Since that point, life has only gotten better for KayLa. She completed six classes in one semester to finish her BS–all with A’s, completed her MPH and Post-Master’s Certificate in Epidemiology, and completed all of her doctoral didactic courses. She met and fell in love with the man she is very happily engaged to (five and a half years strong!). In business, she has become a professional and national speaker, written hundreds of empowering messages, and found many avenues (including her own) where she can be herself and share wisdom gained from life. “I feel like I matter, my voice, everything about me. It truly warms me inside to be able to use all those things and give back at the same time.

Years out, KayLa is still healing in some ways. She believes that dv “survivors” don’t always “fully heal.” Healing after domestic violence is a lifelong process that takes much work; she knows that sometimes survivors need coaching help from someone who knows what it feels like to have overcome such trauma. “There are moments when I experience triggers, and I occasionally have nightmares,” she says, “but telling my story now is moving past that. I lost myself, my voice, my left and right, but now I know who I am, where I’m going, I have my feet planted on the ground, prayed and forgiven everyone.”

“With everything that I do (especially in coaching dv survivors, college students, women who are starting over, and girls/women of “mixed” ethnic/racial backgrounds), my work is rooted in that which I have learned. I feel a humbling responsibility to give that back to others through my business. I’m joyful and loved in so many beautiful ways. I couldn’t be more thankful to have overcome so much as it is what got me where I am today. I am blessed beyond words.”

“When the world tries to knock me down and my days seem long and dreary,” she says, “there is no one past, present, or future who can deter my path or steal my joy because God favors me.”
I’d like to see them try.

Dr. KayLa N. Allen is a doctoral candidate pursuing a doctorate in Health Administration. She has a BS in Interdisciplinary Studies with a focus on the sciences and a minor in Psychology, a Master’s in Public Health, and a Post Master’s Certificate in Epidemiology. She recently served as a speaker and presenter for the National Coalition Against Domestic Violence via their “Recognize (Y)our Power” National Conference; you can view this presentation on her YouTube page. Being a dv survivor turned thriving warrior is only a part of her story. In empowering and equipping former domestic violence survivors, black and brown women, and growth-seeking leaders, she coaches utilizing her experiences, education, and training received from Wellcoaches. KayLa regularly shares blogs via “KayLa’s Positivity Corner”, empowering and thought-provoking messaging, powerful quotes, letters via “Dear Mixed Girl”, and vlogs via “Becoming Dr. KayLa” (all of which are under her name and within her brand and business: Dr. KayLa N. Allen). Under each of these spaces, she shares wisdom, gained knowledge, life experiences, and methods to equip individuals from the inside out to become the best version of themselves. With years of experience as an upper-level national leader, she uses her wisdom, education, and scientific/academic research to help other evolving leaders to become sustainable in practice, impactful, empowering, and empowered individuals.