The dark shadow under my bed 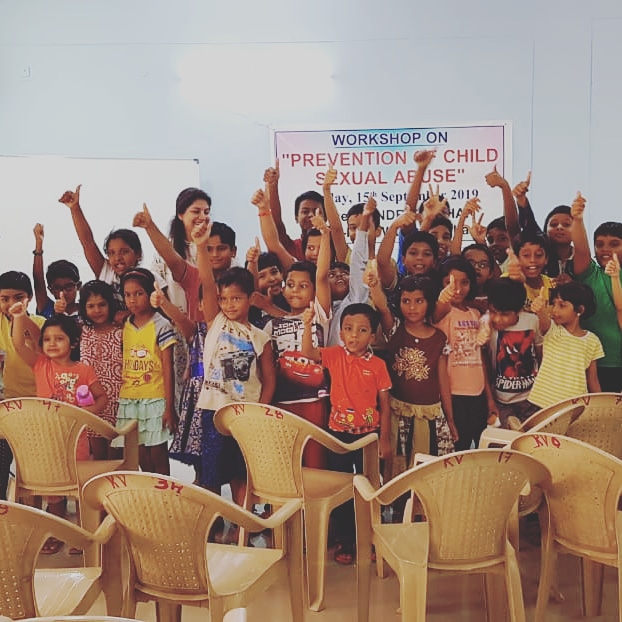 Trigger warning: Before reading this post, please be aware that it contains descriptions of childhood sexual assault and abuse.

I am a strong and independent women today. What makes most part of me, dates back two decades roughly. To be frank the event was so deeply buried in my brain as a “prevent the pain” mechanism, that I am not sure what age was I & I don’t even want to calculate.

I am an army brat, born and brought up in an organization that protects the nation, however failed to protect my childhood and of so many others.
I was abused by a domestic helper, who used to come to take care of my father’s uniform. I called him “bhaiya”, to me he was someone who was close to and would happily play will my younger 2 year old brother. So I was OK hanging around him. When mom dad had to go for official parties, he would stay with us till the time they weren’t back.

If you ask me how it began believe me I was too small and innocent to recall the details. For a while I didn’t even understand what was happening? I remember it in bits. I remember feeling the pain. I remember feeling dirty and shameful. I remember questioning myself why is he doing this to me? I remember running in another room and locking myself up to protect myself & his asking me to come out otherwise we would wake my brother up. I remember the day I gained courage to confronted him and told him I don’t like what he does and that I will tell my dad & him asking me “What will you say? What do I do to you?” I remember answering I don’t know in my head. Frankly, as a 6 year old, I really don’t know what I would have said! If at all I had.

Have we really given children in our society a language to talk about abuse.

Later when it got to a point that I couldn’t take the physical pain anymore I choose to shout for help. That was and still is my last call for help.
My screams were silenced as I saw him put a pillow on my sleeping brother’s face, pressing it and saying to me “I suffocate him to death, stay quite.” That was the last time, I thought to tell my parents anything about it ever. In my head, I knew I had to save my brother from him and that no matter what he did to me, I wouldn’t even whisper about it.

Silence became my only language for those 2 years. I was scared to talk to anyone.

Thanks to my dad’s profession we moved every two years. But even when we moved out of that place, I choose to hide this from my parents, mostly because I was scared what if he got back ? What if I tell them and they don’t believe me or even worse, they also like me believe that it was all my fault?

By then I was convinced, that it was all my fault, that it was because of me that my brother’s life was at constant threat. I decided, I had to punished myself. I still carry the scar of the cut at the place, where he first touched. I wanted to cut out every part of my body that he ever touched but it soon became clear that can’t be done with so much blood to hide from my parents each time & so the feeling to end my life became stronger.

Time passed, childhood has a way to heal itself even if it’s just by masking bad memories. Days went on to be months and months to years. But I have lived a good part of my childhood in the fear of finding that man again. Slowly the memories faded as we moved one posting to another.

It was only in my 10th grade that we had an expert talking about AIDS and giving us so called “sex education” in school, that brought back the memories and the realization of the abuse that happened years back. That was the weakest day in my life.

I remember crying myself to bed several months after that. The fear of seeing him surfaced again, every shadow looked like him, every dark room had him hidden in the corner, every stranger looking at me on the streets had his eyes. I started having sleepless nights with dreams of my brother suffocating under the pillow. I struggled to breathe as the memory of my body being in someone else’s control made my mind numb and the reality in those moments of helplessness became very delusional.

Thus started the struggle of my teenage years, with anger issues, aggression, emotional dysfunction, anxiety attacks & thoughts of suicide. With 3 serious attempts to end my life in 18 years, even death felt deceitful. I hated the idea of existence, of this world, of life and of almost everything around me. I didn’t trust anyone for a very long time. And I became overprotected of children around me.

My abuse became a dark shadow, a demon under my bed, that chose to come out and seize my mind as and when it wanted to.

I tried everything, everything by the book, seeing a therapist, meditating, writing but just nothing seemed to help me in my pain and its psychosomatic manifestations. That’s when I took the decision to tell my parents about the abuse, I was suffocating and was in much need of someone’s support. I can’t say they took it well, all I know is they did the best they could. They at first couldn’t understand or I should say believed that this could happen in the protected environment that we were raised in. In addition they were blaming themselves.

A couple of years have passed we don’t talk about it at home, the last thing I want to do is hurt them and make them feel they failed to protect us. However I am tired of ignoring it and behaving as if it never happened.

This dark shadow, my abuse was, is and always will be a part of who I am. But it would be a source of my deepest strengths and I would one day find the courage to tell my story out loud, that’s something I couldn’t have dreamed of in a million years. But life has its ways…..

My life changed, when I got in touch with a team working towards prevention of child sexual abuse. They encouraged me to be a personal safety trainer & use my inherent protectiveness towards young children to empower them.

It’s been 3 years now, I have empowered 30,000 children with personal safety lessons, with the language to understand safe/unsafe touch, courage to say NO to the perpetrator at first contact & report it to their trusted adults. They know they will be believed and that we stand by them. In addition I work with parents on how to develop trust & open communication with children & how to identify signs of child sexual abuse (CSA) and report it.

I can’t say I have healed completely, I still have moments of trigger.

But with every child I empower, a part of me heals. Nothing gives me more happiness than empowering children. Seeing the courage & trust in their eyes makes me stronger.

I live for only one mission, that no child has to ever suffer in silence, not knowing why & what is happening? Or believing that they are trapped or helpless.

I don’t wish to die anymore, But when the time comes, When I have to die, I want to die in a world that’s safe for our children. That’s the dream, my only dream.

I end by sharing with you a small piece I wrote, when I first found my strength & began my journey towards empowerment.

No pain can ever recover unless you endure it, let it be, accept it for what it has caused, put it behind you and move on to share the pain of others and prevent the younger generation from going through the same.

I am on a mission to ensure that no child has to suffer the trauma of Child Sexual Abuse (CSA). As a child rights activist, I strongly believes that, empowerment through education and training is the key weapon in our fight against CSA. I conduct sessions in schools & societies, empowering children, parents, teachers and staff to identify CSA and report it. In June 2019, I became part of the She Creates Change program of Change.org India and started my petition (change.org/breakthesilence) asking schools to conduct mandatory annual training on personal safety. My journey from a survivor to a trainer has been overwhelming & life changing. My dream is to have an abuse free world. I am currently perusing my doctorate in biological sciences.