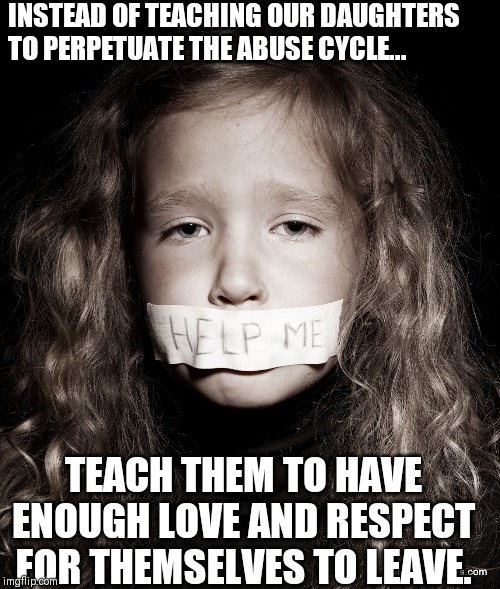 Dedication: This Story is dedicated to my mother who taught me to be strong and speak out for what I believe in.

I am a Survivor of family/relationship trauma. Mother was abused by my father for 15 years and I growing up in a home where violence was prevelant swore I would never be a victim. However, as young as three years old I can remember being sexually abused by my half-brother. When I told my parents they did not report it to the authorities but instead just sent my brother to live with a family member but later let him move back home. I can remember this happening on 2 different occasions once when I was only 5 and again when I was thirteen. When my mom let him move back home the last time I was only 13 and he was 25. She put a lock on my door but it did not keep him from trying to walk in on me while I was getting dressed or from making lud comments to me. When I was only 15 I met the man who would later become my husband; he was 21 and I was barely 16 when he took my virginity. He seemed like prince charming and after only a few months promised to marry me one day. He promised to protect me and keep me from my brother. We dated on and off until I was 19 and then he moved away to Texas. After breaking up with my fiance at 20 I contacted him and moved to Texas with him and his fiance. He told me it would be strictly platonic but after I got there I found out him and his fiance were polyamorous and wanted me to be part of their relationship. I was hesitant but agreed because he was my first love a d I never really got over him. At age 22 I moved back to Indiana with him after his finance had an abortion and broke his heart. He claimed he only wanted to marry her for duel citizenship in Italy. I ignored all the read flags, made excuses for the abuse and married him at age 23. I can remember at time when our children were only age 5 & 6 were the Psychological and physical abuse were so bad that I was made to believed I was a bad mom and that the only way to stop the abuse was to let him kill me as he had attempted to do in the past when I’d tried to leave and take our children with me. I was with my husband for 12 years and married for 10 before I finally got the courage and strength to leave. I am now in the process of getting a protective order that includes our children and divorcing my husband. We have been separated for over 4 months but by the time our divorce is finalized it will be 7 months. I have now started therapy for the C-PTSD I incurred due to the severity of the abuse I experienced, I have started an advocate group on Facebook called U.P. R.A.I.S.E or (United Purpose to Raise Awareness and Inform Survivors Everywhere) I am writing a book about the trauma I experienced and created my own personal hashtag #UnitedPurpose I’m aytemp to unite Survivors who are fighting to end domestic violence. I also am looking to get certified as a Life Coach for Relationship and Family Trauma Recovery once our divorce is final. I after a lifetime of trauma I finally feel like I have worth, purpose and no longer am afraid to share my story; infact I feel it is my duty to tell in so that it might empower others to transform their lives and prove no matter your situation you can rewrite your story to have a happy ending.

I am a Survivor dedicated to changing the way society and our legal system treat trauma Survivors who make delayed reports. I am a mother dedicated to making sure her daughter grows up in a world where we no longer blame the victim or invalidates her story if she should find herself wearing the victim label and who wants her son to grow up without being subject to violence. I am dedicated to transforming mine andy children's lives so they can grow up in a happy & loving home.