From Cancer to Pregnancy 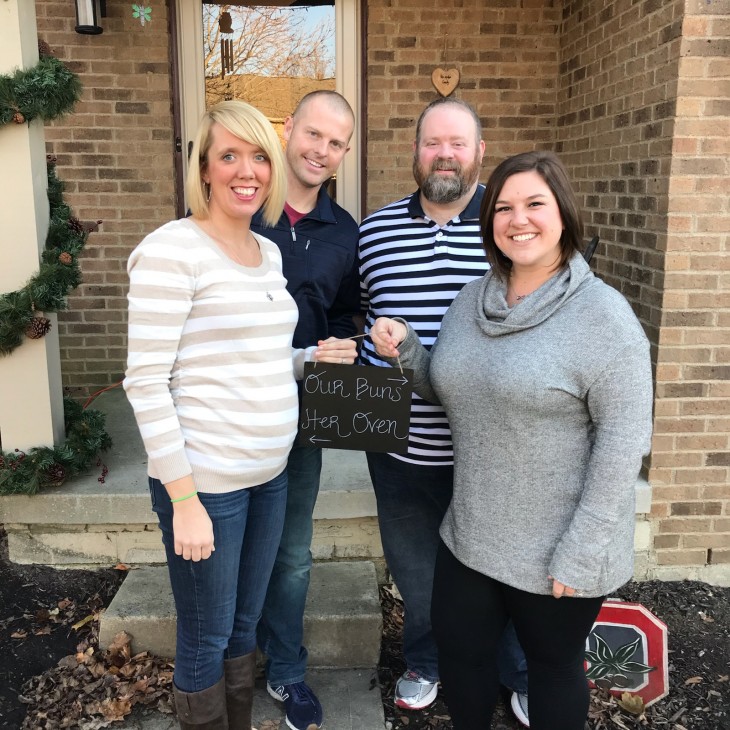 I certainly did not know when my husband and I got married in September 2016 that our lives, and marriage, would so quickly change. Just a little after we celebrated 2 months of marriage, I was diagnosed with cervical cancer. Words like “hysterectomy” and “adoption” were thrown out by my medical team and I felt such terrible despair. I kept thinking, “this isn’t how it’s supposed to go”. My husband and I were referred by my oncologist to a reproductive endocrinologist to determine what my options were. I was left with 3: the first of which was a less invasive procedure which may have given me the opportunity to carry children but with very high risk or miscarriage or pre-term birth. The second, I could undergo rounds IVF so that our children could be carried by a gestational carrier after a hysterectomy. The third, a hysterectomy and then adoption.

My husband and I had many discussions about our family’s future. We said many times that there are different ways to make a family, so we began researching adoption while we hurriedly underwent 2 rounds of IVF. We opted for the IVF before we even knew what we were doing, but time was not on our side. My cancer was aggressive, and we needed to make a decision. During my 1st round of IVF, and based on the recommendation of my oncologist, we decided on a radical hysterectomy which was scheduled for just 7 weeks later.

I shared the news of my cancer and the decisions we faced with my best friends. The next day, Heather asked if I would call her because she wanted to talk to me about something important. During our call, she said that months before, she had felt the desire to be a surrogate. She felt a calling and that she could help someone deserving to have a family. When she found out our news, she knew she was right. She offered to be our surrogate and I was overcome with emotion. I couldn’t believe that someone would be so wonderfully selfless to offer my husband and I the ability to have our own children.

Heather and I met in September 2001, in Park Hall of The Ohio State University. We very quickly became friends, spent time with each other’s families, and significant others. We were roommates beginning with our sophomore year and ending with our senior year. Though I moved to Florida after graduation, we stayed close. I was honored to be a bridesmaid in her wedding to her wonderful husband, Jeremy, in July 2007. Together, they created a beautiful life. Their eldest daughter Macy is a generous, empathetic child who is the spitting image of her mother in both nature and looks. Samantha arrived 2 years later, and is a fun-loving, observant little girl who took on her father’s sly smile. She is my goddaughter and I adore her. Heather has been by my side through many relocations for work, even visiting me out in the dead of winter while I lived in Green Bay, Wisconsin. After I met Jarrod, my soon-to-be husband in 2015, she celebrated our growing love with me. Heather stood with us as a bridesmaid on our wedding day. Though we live in Cleveland, Ohio and she lives in Columbus, we see each other as often as possible. Trips to Put-in-Bay, Hocking Hills and Punta Cana continue to nourish our friendships and feed our strong bond.

Many people know what surrogacy is, but aren’t familiar with what is truly involved nor the medical terminology. Jarrod and I certainly didn’t before we were thrust into this world! After the rounds of IVF, we had 5 embryos. It wasn’t as many as we would have hoped but we still had options, which made us incredibly grateful. It took several months after my hysterectomy before I really felt that I was back to myself in any way. It was the difficulty of losing my ability to carry children but also the unknown of our future that continued to loom over my head. Heather, Jeremy, Jarrod and I kept our future plans quiet as there were so many unknowns, and the more people that knew, the more we would possibly have to tell if it didn’t all work out. We began the first steps in June, which required Heather to undergo a medical exam by our reproductive endocrinologist’s team to ensure that she could again carry a baby to full-term. During that same visit, we all met with a psychologist to review potential difficult decisions that we may have to face as a foursome in this journey. If the baby is diagnosed with a birth defect, would we terminate the pregnancy? We all agreed that we would not. Jarrod and I would love our child no matter what. Heather and Jeremy had to answer a 500+ Scantron questionnaire to assure that they were also psychologically prepared for their role. We received the green light from the medical team and moved to the next step: legal.

Both the intended parents (Jarrod and me) and the carrier (Heather and her husband) needed legal representation in order to essentially draft a contract saying that the child was Jarrod and mine. It felt so cold and read exactly like you’d expect a contract to. It made me even more thankful for my relationship with Heather because we have always been able to speak so candidly with each other. Even before we got this far, we had talked about everything that was covered in the contract: how many embryos would be implanted, what would we do if the baby was diagnosed with a congenital disease and ultimately, what would we do if we weren’t able to get pregnant this way at all. So, while the contract process took a bit of the romance out of this process, the four of us had very open conversations about what we would include. Finally, the contracts were created be our respective attorneys and now we could actually try to get pregnant!

People see in the movies the unpleasantness that follows when a woman has to inject hormones into her body to try to get pregnant. I don’t think people realize just how long this goes on. Heather began injections in August to prepare for the transfer at the end of the month. If we got pregnant, she would have to continue to inject herself with a substance that looked like maple syrup every night until the 11th week of pregnancy. That is definitely commitment! The transfer would take place on August 31. She was fully open to having two embryos transferred which would increase the odds of achieving pregnancy, recognizing that twins may be a possibility. Even so, we had about a 45% chance of getting pregnant at all, and twins were a 30% chance separate from that.

The day of the transfer, the four of us were nervous, held hands and just tried to be positive and take it all in. We went to lunch afterward, talked about what could be, and just enjoyed the time together. I had purchased a handful of pregnancy tests for Heather but the nurse had said to wait about 10 days before we’d see anything. Sweet, impatient Heather called me about 7 days later and said she couldn’t wait and had gone through all of them. I couldn’t stop from laughing. She had gone in for blood testing and the HCG levels (a hormone which a woman produces when pregnant) were increasing as we would have hoped! Finally, on September 14, the doctor confirmed: we were pregnant!

I couldn’t believe it. I was so excited, I wanted to go out and buy everything baby. But, I had to remind myself, we were so early in that I just had to temper that excitement. On September 29, we had an appointment with Heather’s OB/GYN in Columbus to see our first ultrasound. The four of us sat in a small, dark room, watching the monitor, not knowing what we were looking at. The ultrasound technician looked over at us and said, “Guess who has 2 heartbeats?” Heather and I held hands and cried together. The ultrasound technician cried! She told us that she had her two children via surrogate so she is just so happy for us. We began calling them Merle and Pearl, and we were all just ecstatic. Twins! We couldn’t believe it. On the drive home, Jarrod and I started throwing out possible baby names and reveling in the news.
We knew we wanted to find out the sex of the babies because we wanted to feel more involved in the pregnancy. It would help me to nest if I was buying girl or boy items. Prior to our early November appointment, we had opted to do a blood draw to determine if there were any congenital issues we should know about. Like our OB/GYN, we agreed that information is power. The test results would be able to tell us if there was a Y chromosome, which would mean there was at least one boy in there. It could be two boys or a boy and a girl. If there wasn’t a Y chromosome, it would be two girls. We found out shortly after that we were having at least one boy! On the drive home, Jarrod said to me, “Are you ready to meet your son?” and I just cried on his shoulder.

On December 4, we went in for our 16 week ultrasound and didn’t expect to find out the genders because all the week-by-week pregnancy guides said it’d be more likely around week 20. Again, we are in the small, dark room and the ultrasound technician finds Baby A, which is the boy. She showed us how she could tell it was the boy and we could see his twig and berries. Baby B was being a little more shy but showed us a perfectly shaped skeleton and their cute heartbeat waving on the screen. We had a different ultrasound technician this time, but by now, they all knew our story. The technician freezes the screen, turns to us and says, “Something looks different on this one!” We were having a girl. Merle and Pearl were confirmed for May 2018!
Now we are in our 20th week of pregnancy and the babies are the size of a banana. Jarrod and I are in preparation mode, cleaning out our guest bedrooms to make room for cribs and gliders, signing up for infant care and CPR classes and looking at trading in my zippy little car for a minivan. We have been married for 1 year and 3 months and have already gone through some incredible trials but we are stronger for it. It made us a better couple who is preparing for these sweet babies to enter our lives and we can shower them with love. Heather told our story to a friend of hers who said, “Ya know, I don’t believe in God but to hear about your friend getting married, having cancer, beating cancer, then getting pregnant with boy and girl twins, something bigger is at play here.” Throughout hearing the news of my cancer diagnosis, and then the ensuing treatment options and recovery, I always wondered what exactly our journey was supposed to be. Why would I finally meet the man of my dreams to then have my image of our perfect lives ripped away from me? Maybe our story is meant to inspire hope to people who have lost it. When we thought that life was throwing us an obstacle that we weren’t prepared to face, an angel named Heather swooped in and gave us options. I will always love her for that.