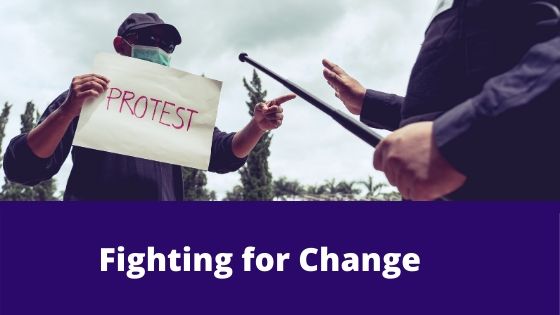 Dedication: I would like to dedicate this story to all those who are fighting against racial injustice around the world

The past few weeks have been unsettling. First, Covid-19 forced us to stay at home, and we became masked-people. Then we witnessed on national TV the senseless murder of George Floyd. Now, protest marches have sprung up across the country crying for justice.

I was born in the historic Hill District of Pittsburgh, and I was raised in the South Oakland area, which was located a stone’s throw away from the University of Pittsburgh. In fact, if you walked out of our front door and looked to the right, the Cathedral of Learning (a 42-story late gothic building and symbolic centerpiece of Pitt) stood tall in the skyline facing us and watching our every move. Sadly, many of the kids in my neighborhood never felt they could even step through its doors.

My mother owned a beauty shop in the Hill District on Centre Avenue across from A Leo Weil Elementary School. It was from that doorway of the House of Beauty that a got a vivid view of the 1960’s Civil Rights riots. As a little girl, I remember seeing buildings on fire, armed national guards marching up and down the street, people with picket signs. I also remember my mother posting a “Black Owned” sign in the front window of the shop to prevent it from being a victim of vandalization. The whole city was in turmoil!

Although I understood the sadness and anger behind the assassination of Dr. Martin Luther King, I was too young to comprehend what people were ultimately marching for. It wasn’t until I was older that I experienced racism and prejudice first-hand. For example, when my parents initially purchased our home in the 1960s, the people next door, who happened to be Italian Americans, immediately put up a “For Sale” sign. Once they realized we were ok, they eventually calmed down and never sold. I also remember during grade school, one of my classmates invited me to her house to play afterschool. She and I had bonded as friends and were looking forward to getting together. However, once I got there, her mother stated she could not have company. I knew it was because I was Black.

In high school, I was a good student earning As and Bs in the majority of my classes. Ok. . . I just barely got a C in Italian. I also dreamed of going to college. However, Sister Sylvia, the high school guidance counselor, told me and a number of African American students that we should consider a trade school as she was not sure we were college material. In some ways she became the catalyst that made me determined to prove her wrong. Once I received my bachelor and master degrees, I went back to the school just to show her that I had made it!

A few years later, I applied for a contribution’s coordinator position at Equibank, and based on my qualifications, I was immediately called in for an in-person interview. I remember the surprised expression on the face of the Human Resource person and how her demeanor totally changed when she saw my black face. I knew right then I was not getting the job. This was disappointing as I had been doing the exact job previously at Calgon Corporation and knew I was more than qualified.

When I was dating my husband Martin, I lived in Media, PA, a quaint town located in the suburbs of Philadelphia. He would often come from New Jersey on weekends to visit me. One Sunday morning, we went to the ACME supermarket, just up the road from my house. While I was in the checkout line, Martin decided to get the car and meet me in front of the store. Upon driving down the road, we noticed sirens behind us. We pulled over and they pulled behind us. The cop made up some bogus story about a clerk seeing a black man hurrying out of the store. He also asked what he was doing in the neighborhood because of his New Jersey plates. I quickly responded that I lived in the neighborhood and asked if he wanted to see my grocery receipt? At that moment, he began to back off. I shudder to think what would have happened if my husband had been alone in this instance.

These are just a few examples of the racism I’ve experienced. As I look at the marches and rallies across the country today, I understand why they are frustrated and taking to the streets. They are marching for the same things my parents marched for in the 1960s: justice, opportunity, jobs, fair housing, and overall equity. My parents marched for the opportunity for their kids to go to the best schools, swim in the public swimming pools their taxes paid for, and even go the amusement parks from which they were banned.

As a people, we are tired. Tired of being discounted. Tired of our children’s lives being sacrificed…tired of the police brutality. I don’t believe all cops are bad, but in the Black community most of us were raised to fear them. Unlike in the White community where the police are viewed as protectors. It is really about the experiences we have had.

Yes, things have gotten better for some of us. Many of us have our own businesses and have adequate incomes. However, most of us are still suffering from the casualties of day-to-day racism.

There Are Many Ways to Speak Out and Help Close the Racial Divide?

Vote — Vote at the local, state, and federal levels for those candidates who truly represent us. While you’re at it, challenge those leaders to make sure they are delivering on the promises made.

Contribute to a Cause — Just yesterday a colleague held a birthday fundraiser to benefit Equal Justice Initiative, an organization committed to protecting basic human rights for the most vulnerable populations. I happily contributed and will give to other organizations that I feel need support.

Speak Up — It’s not enough to say you are not racist, especially if you are supporting racist policies through your actions. Anti-racism is about celebrating and appreciating differences. If you don’t see diversity in your organization say something. Protesting peacefully and calling for accountability are just some of the ways to speak up.

So, I stand with my brothers and sisters to fight again injustice and racism. I join them in exclaiming: Change is needed to address the issues facing Black People in this country today. Black Lives DO Matter!

~
This story also appears on LaNella Hooper-Williams’s own website… https://lanellahooperwilliams.com/