All the Medals Look the Same.

Ellen Carver, United States
Attempting Something New, Being an introvert, Diabetes, Encouraging/Empowering Others, Girls on the Run International, Sports 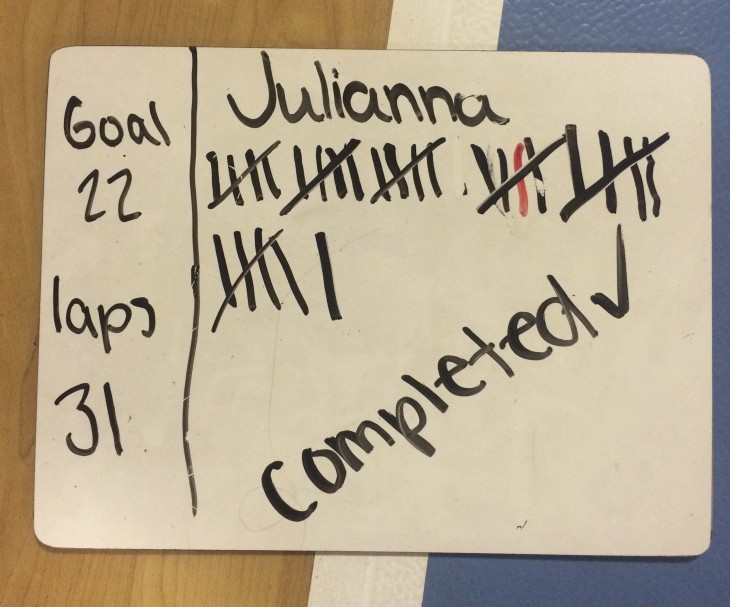 When Julianna joined our program last Fall she was 9 years old, weighed 185 pounds, and had Type 2 Diabetes. Julianna was in and out of foster care because her mother was going through rocky times. Her demeanor was unhappy, sullen, introverted. It was hard to get her to make eye contact at our first few practices, and she certainly wasn’t displaying the kind of joyful, healthy confidence we claim to inspire in our girls. When it was time to run some laps, Julianna shuffled and said her asthma would prevent her from running.

I checked with the school nurse and learned that there were no physical restrictions on Julianna’s participation. At the next practice, after our circle time lesson, I spoke to her privately and invited her to be my “Running Buddy” that day. I told her I had a bad hip and that I would be grateful if she could go slowly with me and walk some so I didn’t hurt my hip. We moved along at a reasonable walking clip, and a thin layer of Julianna’s protective cover began to slowly melt.

Each time she returned to practice, it took a lot of gentle handling and extra encouragement to get Julianna to join our circle, share during reflections, run during lap time. But we coaches and teammates never gave up on her. Then about the sixth lesson, I saw her flash a single smile when I high-fived her after she ran a whole lap.

It wasn’t long after that Julianna began to challenge herself by increasing her lap goal on her “Identity Card”. Some of the words and pictures she drew on her card began to look sunnier. I now looked forward to having her as another joyful member of our team at each lesson.

At the end of the season, all 950 girls from around the region came together for the celebration 5K. Julianna was back living with her mother, and she was anxiously waiting for Julianna at the finish line with me. When it seemed like the event should be over, because no more girls were in sight, her mom began to get mouthy. I knew it was worry, masked as anger. I was on the headset with our course marshal and knew Julianna was still running. I tried to reassure her mother. Then she appeared around the last bend with her Running Buddy by her side cheering her on. She was dead last finishing that 5K. She was absolutely radiant, and earned the same medal as all the other runners that day. The triumph and impact Girls on the Run offers kids like Julianna in early adolescence is transformative.