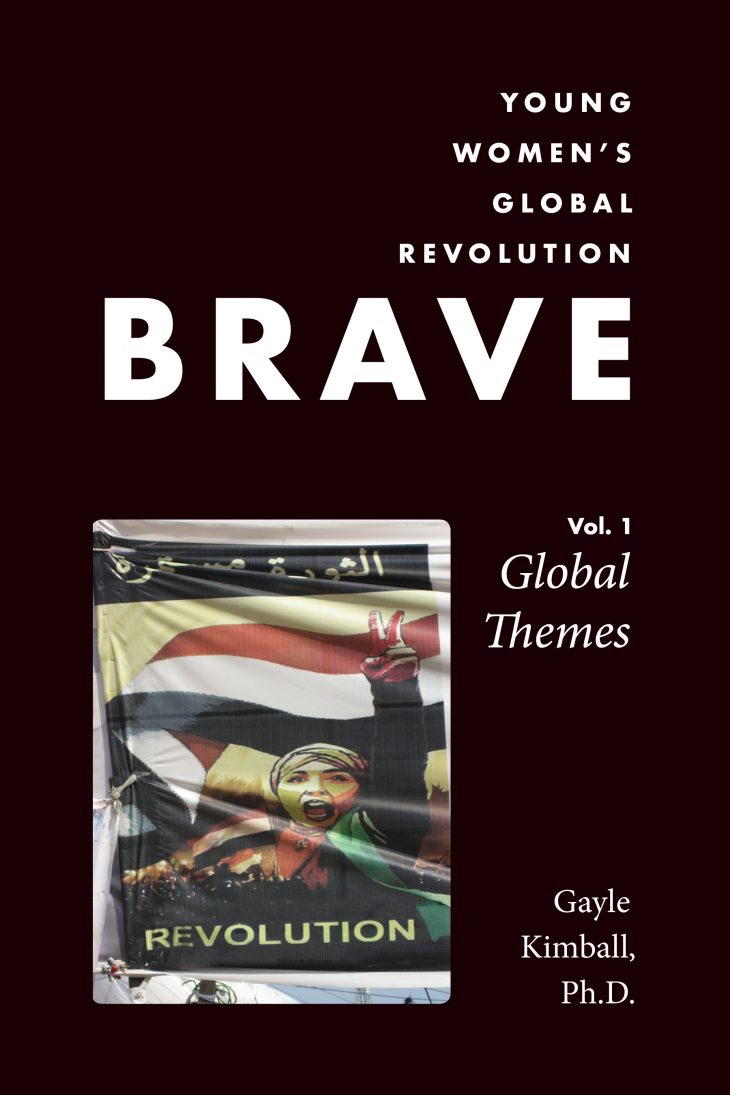 Dedication: To all the girls and young women who shared their thoughts with me.

My story is I do my activism with my writing. Since I couldn’t find a book about global young women’s activism, other than regional studies, I traveled to hot spots for democracy uprisings like Cairo, Istanbul, and Athens to talk with the new generation of feminists, struck by their courage. I surveyed or interviewed over 4,000 young people from 80 countries and reported on what they said in six books such as “Ageism in Youth Studies.” Part of series on youth activism, “Brave: Young Women’s Global Activism” is available as a two volume inexpensive eBook since I think books should be affordable, as well as in paper. Many of the video interviews are available on the TheGlobalyouth YouTube channel.

Here’s an example of a teenager I interviewed for Brave. Why would Yara, a middle-class girl living in Cairo, risk her parents’ disapproval and worry, as well as her life, by demonstrating daily in Tahrir Square in 2011? Conducting “history from the bottom,” that is, listening to those who are not famous “great men,” to find out what influenced an activist teenager, I interviewed Yara on Skype and in emails in 2013 and 2014 (see video). She describes her experiences as a revolutionary. Yara’s mother is very religious and wears hajib headcovering, but Yara is an agnostic who doesn’t cover her hair, and is not constrained by traditional religious beliefs that girls should stay at home (influence 1). She doesn’t think it’s fair to condemn someone to hell just because they don’t have certain religious beliefs. As a scientific person, she believes in Newton’s law of conservation of energy, which she says can be called God. Her parents’ education and class status enabled her to get a good education what supported her activism (her class background and education is influence 2). Like her mother, Yara is a “science geek” who would like to major in physics or astronomy when she enters university.

Yara said the January 25 revolution wasn’t made by the hungry, but was led by well-educated people like herself in a country where over a third of females and 18% of males are illiterate. More than 35% of middle-school students ages 12 to 15 are illiterate due to large class sizes and inadequate teacher education. In rural areas girls leave school early to get married, which is in stark contrast to Yara’s urban education, and two million women have never been in school. Unlike village girls, her father keeps Yara informed about political issues, and most of her school friends also had no idea what was going on; they didn’t even know about leaders like Mohamed ElBaradei who floated the idea of a presidential campaign. Her friends simply talked rather than acting, so she thought she would have to leave Egypt to order to make a difference. She said many people supported dictator Hosni Mubarak because he was a familiar father figure.

Yara was 14 and 15 when she went to the streets and slept in a tent in Tahrir Square during the January 25 revolution, although Egyptian girls do not sleep in mixed sex gatherings. She knows martial arts, so the last man that tried to sexually harass her ended up with a broken hand (not being afraid and being angry is influence 3 on Yara’s brave activism). She saw people killed by police gunfire, including one of her friends. Their deaths made her want to complete their goals even if it meant she would also be killed.

Yara and many of her peers around the world abhor the traditional cycle they are taught to follow: go to school, get into a good college, do a boring job, marry and have kids. They’re ambitious and give each other courage to rebel through their global social networks (influence 4 on her motivation). Yara is deeply involved in Harry Potter books and films, the British hero and role model who routinely defies authority and succeeds.

Yara views herself as strong-willed and altruistic: “I’m the passionate outspoken girl, who will tell you exactly what’s on my mind.” She views herself as full of contradictions such as, “I’m the shy, awkward kid, who still steps up to steer. I’m the introverted social butterfly. I’m the girl who believes that helping people is her solitude. I’m the hotheaded politician who still believes in Utopia. I’m the down-to-earth type of person who refuses to take a back seat.” As the first-born in her family with a younger sister and brother, Yara is expected to achieve (influence 5). She’s determined to do well—a trait often associated with high-achieving firstborns.

A pattern for successful women is having an appreciative father whom the girl identifies with, rather than the mother. Yara’s encouraging relationship with her father is similar to Malala Yousafzai, as described in her autobiography I Am Malala (2013). Malala’s father said in the feature film He Named Me Malala (2015), “We’re one soul in two bodies.”

After the Tunisians succeeded in expelling their corrupt president, Egyptian youth gained the confidence to take action. Yara reported, “People felt and understood we are the power.” (Hope is influence 7.) She thought of the Egyptian people as uneducated, but after the demonstrations she saw a different side of people as she stood side by side with girls who were on the front lines and with Christians and Muslims guarding each other during prayers. After January 25 she witnessed great positive energy as people cleaned up the square and painted the walls; she observed, “Everyone was trying to do something.”

Yara was in Tahrir Square on January 25th, the first day of the 2011 revolution, right after she took an exam in her high school. She was involved previously with political groups like the April 6 Youth Movement and had some connections with the administrators of the We Are All Khaled Said Facebook page. That page changed public opinion with its photos of the battered young middle-class man killed by police. She said a lot of people administered the Khaled page. Her group of activists thought about 200 people would show up in Tahrir Square on January 25, but by around 3:00 PM they heard the ground shaking and were shocked when 80,000 people came to the square.